Do you have coronavirus symptoms?

Contact your primary care doctor, an urgent care clinic, or your local health care center. Do not show up unannounced at an emergency room or health care facility.
Watch for Symptoms
Protect Others
Get Tested

The Life of a Law [Infographic]

Next week, the majority of laws passed through this year’s legislative session will come into effect. These laws have taken long journeys from someone’s initial idea to bills to where they are now. Oftentimes, the individual bills take slight variations, but they always go through a few certain steps.

Check out the infographic and related links below to learn about Georgia's legislative process.

Jump to the text alternative of this infographic. 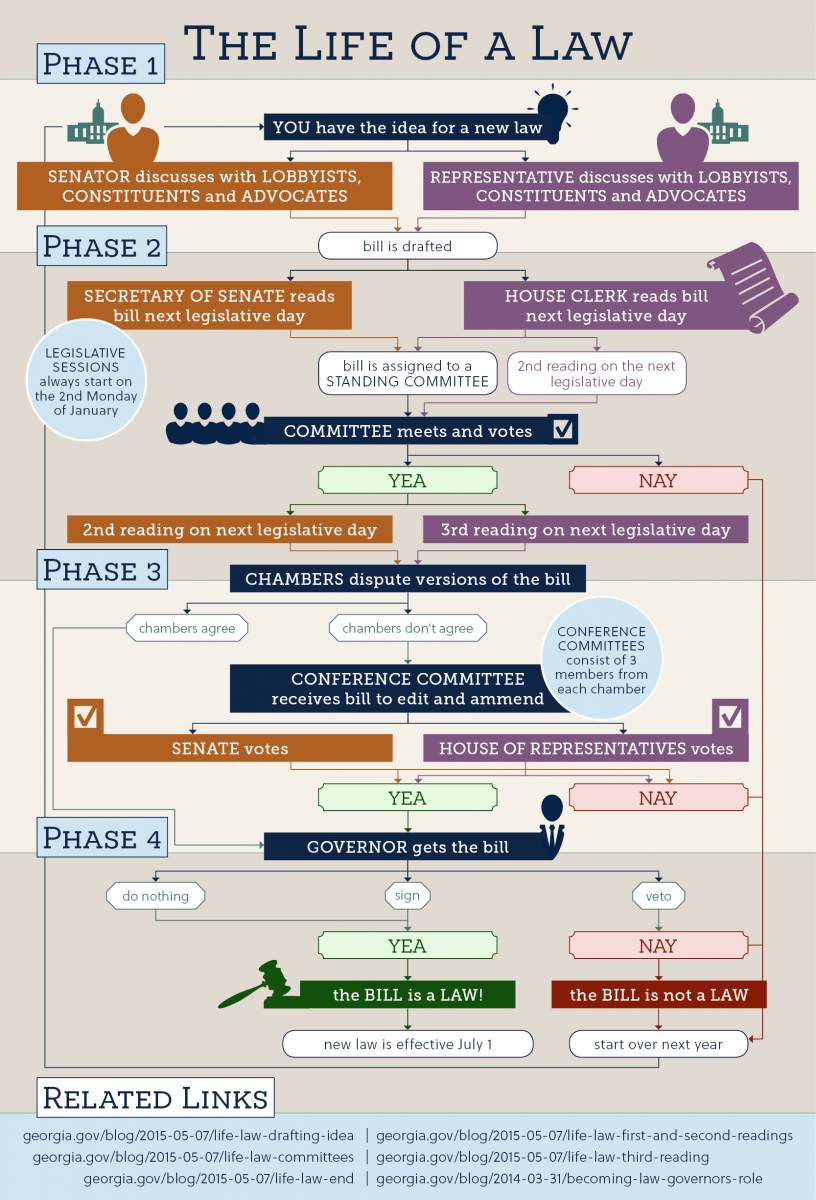 One advantage of our democratic system is that we all can be involved. State laws affect all of us, and any one of us can have a great idea. When you see something that you’d like to see changed, approach a Georgia state senator or representative. If they support your idea, they’ll bring it up with lobbyists, constituents and advocates, then get it drafted into a bill.

Once legislative session starts on the second Monday of January, the year’s bills are introduced in each chamber. The Secretary of Senate and House Clerk formally introduce bills in their respective chambers on the first day of session with what is called the First Reading. Bills are read a second time in the House on the next day.

Before a bill can become a law, it travels through both chambers. Both chambers might agree on this original version of the bill, but it’s likely that they will have changes to make. Nuances in the law-making process are most likely to occur during this back-and-forth period.

After a number of changes and disagreements, a bill may be assigned to a conference committee, consisting of 3 members from each chamber. The conference committee will edit and amend the bill, then present it for both chambers’ votes in its final, unalterable state. If both chambers pass it through with a “Yea” vote, then the bill is on its way to the governor.

When the governor receives a bill, he has 3 options: he can sign the bill, veto the bill or do nothing. If he does nothing or if he signs the bill, it becomes a law.

If the governor vetoes the bill, or if it is voted down at any point during session, it is not a law. Since Georgia’s legislative session runs in 2-year cycles, an unpassed bill might be able to pick up in the second year where it left off last, but it will otherwise need to start over from the beginning. Don’t see this as a failure! Starting over will give everyone a chance to rethink the bill and see what alterations can give it a better chance next time.

And here's where our journey ends. Unless otherwise noted, new laws become effective on July 1.

The Life of a Law [Infographic] Related Links

The Life of a Law: Drafting the Idea

Learn more about how an idea becomes a bill.

The Life of a Law: First and Second Readings

Read how bills are introduced to the House and Senate.

The Life of a Law: Committees

There are a few types of committees in the General Assembly. This is where much of the work happens.

The Life of a Law: Third Reading

Once a bill passes favorably through a committee, it's back to the chamber.

The Life of a Law: The End

It's time for the final votes!

What's the governor's role in the law-making process?

Rachel Hart is the User Experience and Inferface Designer for Digital Services Georgia. On Georgia.gov, she makes government material approachable with writing, infographics, videos, and other imagery.

View all news by this author

The 2019 legislative session is over. What did the General Assembly do?

The legislative session is over and done, and all that’s left to do is obey the new laws, most of which take effect July 1.

Georgia’s Opioid Epidemic and Ways to Get Help

Georgia is #11 in the U.S. with opioid overdose deaths. Fortunately, we have the education and training to slow down this terrible disease and save the lives of our loved ones.